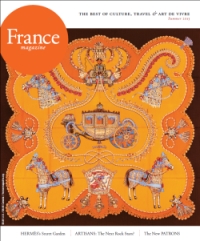 EPV, It stands for “Entreprise du Patrimoine Vivant,” and in the world of French craftsmanship, it’s become a highly coveted distinction.
The three most sought-after letters in the world of French craftsmanship stand for Entreprise du Patrimoine Vivant, a distinction that confers valuable recognition and benefits on the country’s most outstanding artisans. Amy Serafin looks at what it takes to become an EPV and profiles several of the companies in this exclusive club.